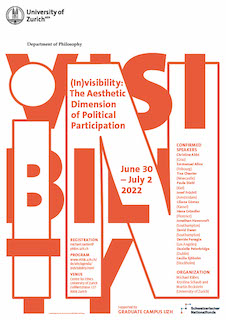 Contemporary democratic subjects are participants in ocularcentric societies that privilege vision and are characterized by the ubiquitous availability of images, driven by technological and cultural changes on a global scale. Contemporary citizens, then, are viewing subjects; they use languages and technical objects that are imbued with metaphors and practices of seeing and visibility. But what does it mean to be a viewing subject in a democratic society, and what does it mean to be visible to others? What are the aesthetic, social and political presuppositions and implications of seeing and visibility in today’s democracies?

Our vision, our ability to see, is, as Marx noted, a disposition that is a product of our historicalvcircumstances. The production and presentation of images and our corresponding habits of seeing are culturally, economically, politically, and aesthetically mediated and can never achieve anything like total visibility: our ability to see is always aspectual (Wittgenstein) and partitioned (Rancière) and therefore prone to blind spots and aspect- or soul-blindness (Cavell) to other people and the nonhuman world. This is what the unnamed narrator in Ralph Ellison’s novel The Invisible Man speaks of when he speaks of his own social invisibility as an effect of the blindness of the “inner eyes” of those with whom he comes into contact, those eyes with which they view reality through their physical eyes. If one follows this metaphor of the inner eye, then making a person or the non-human world socially and politically visible does not consist in perceiving them more acutely or observing them more closely, but depends fundamentally on people’s individual and collective aesthetic-moral disposition – their inner eye – which guides their ways of
seeing.

This metaphor of the inner eye suggests that questions of social and political participation and belonging – questions of social justice and democratic participation – are not adequately addressed when theorized in terms of distribution of resources, rights, or opportunities, or in terms of epistemic, moral, and legal recognition and representation alone, but that they must also be theorized in terms of (in)visibility and its aesthetic, social, and political conditions. But what does it mean for a critical political philosophy to think about questions of social justice and democratic participation in terms of visibility and invisibility? In recent years, there has been a growing interest in such questions in practical philosophy and political theory. The aim of this conference is to present new work on such questions, by bringing together political and social philosophers, political theorists and scholars from cultural studies pursuing diverse approaches to such questions. The conference includes contributions on questions and topics including:

This event is hosted by the Center for Ethics (University of Zurich) and organized by Michael Räber (Zurich).

Currently, we plan for this event to be held in person, but if circumstances dictate, it may be held partially (hybrid) or fully online.